How to Play AVI Files on Windows 11

AVI is a type of video file format created by Microsoft back in 1992. It was a popular video file type for Microsoft Windows back then. However, due to the availability of better video formats such as MP4, AVI is rarely used now.

If you have an AVI video file you want play on Windows 11, this guide will show you how to open and play AVI files on Windows 11 using one of the pre-installed video players or a popular third party video player.

Also see: How to Add Subtitles to Video in Windows 11

How to open AVI files on Windows 11

The easiest way to quickly open an AVI file on Windows 11 is to right-click the AVI file and select Open with. From there, you can see a list of apps (video players) that can support and open the file. Choose any of the available video players to play your AVI file. 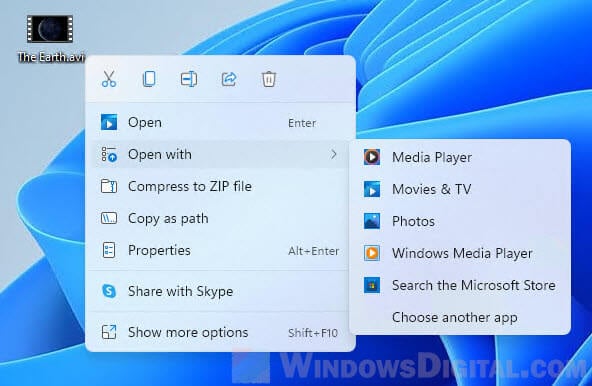 The AVI file should then be played directly on the selected video player. If Windows 11 prompts a pop up that further asks “How do you want to open this file“, simply select the video player you want to use again. 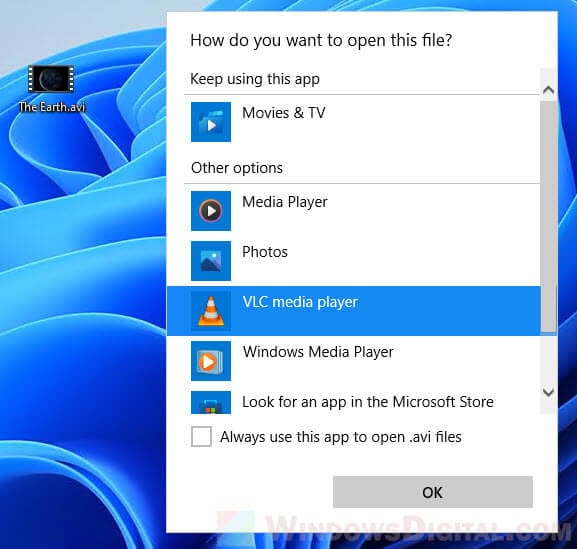 In Windows 11, there are generally 3 preinstalled video players that can support playing AVI files. You can open your AVI file with the new Media Player for Windows 11, Movies & TV app, Photos app or the classic Windows Media Player. If you have other third party media player, you may also see the video player on the “Open with” list.

Suggested Guide: How to Search Only Video Files in Windows 11 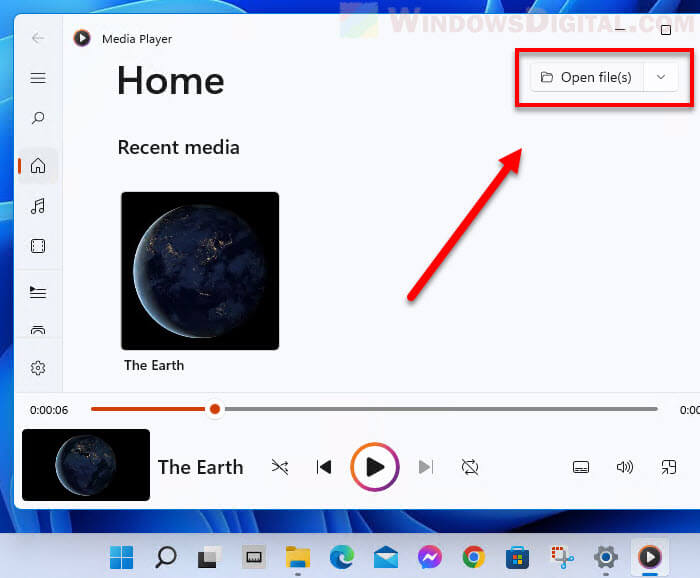 The screenshot below shows how it looks like to play a video file in Windows 11 new Media Player. 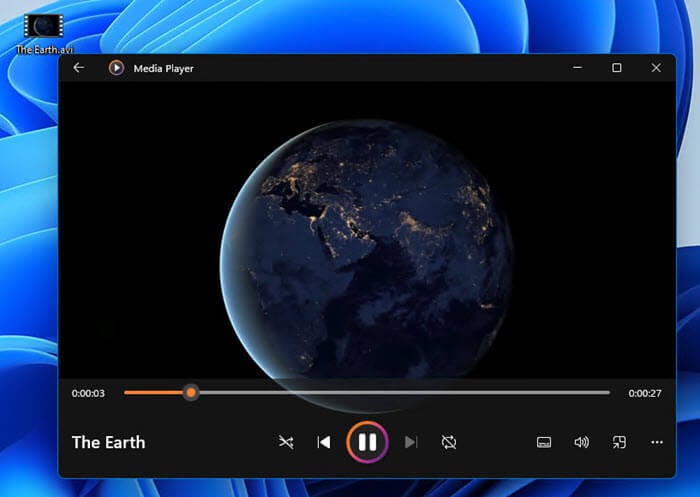 The screenshot below shows the interface of Movies & TV when an AVI video file is played using it. 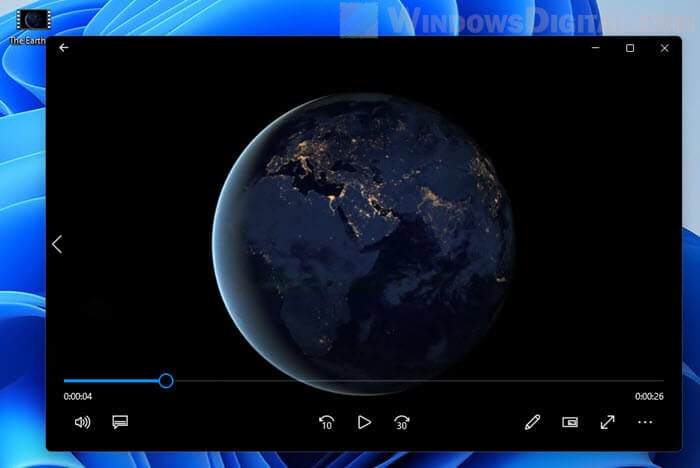 Alternatively, you can also use the Photos app to play your AVI file. Despite how the name of the app sounds, the Photos app can play videos too. The below is how it looks like when you play an AVI file with Photos app on Windows 11. 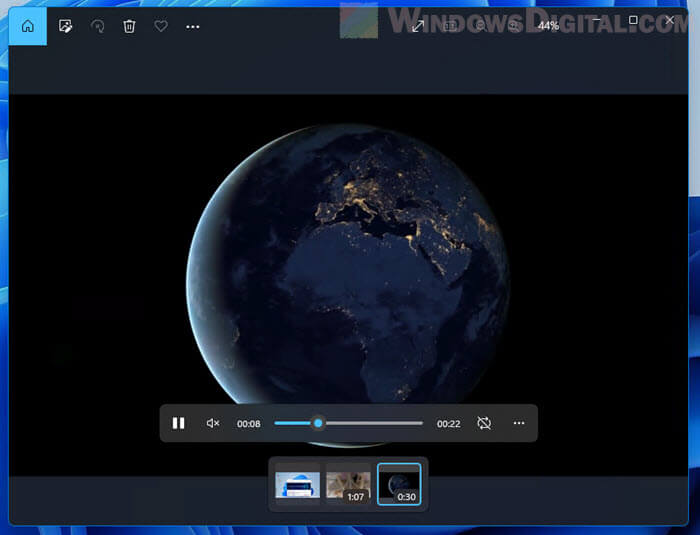 How to open AVI files in Windows Media Player The screenshot below shows how it looks like to play an AVI file in Windows Media Player on Windows 11. 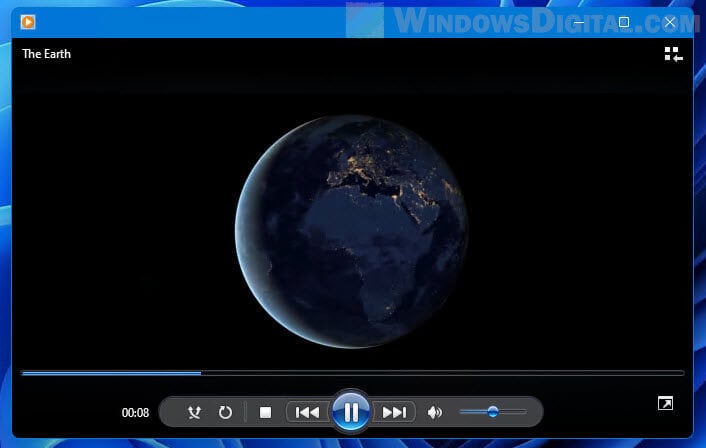 If the preinstalled video players mentioned above couldn’t play your AVI files or if you are not satisfied with their interfaces and available features, you can use a popular third party video player called VLC media player instead (probably the most widely used video player in the world). 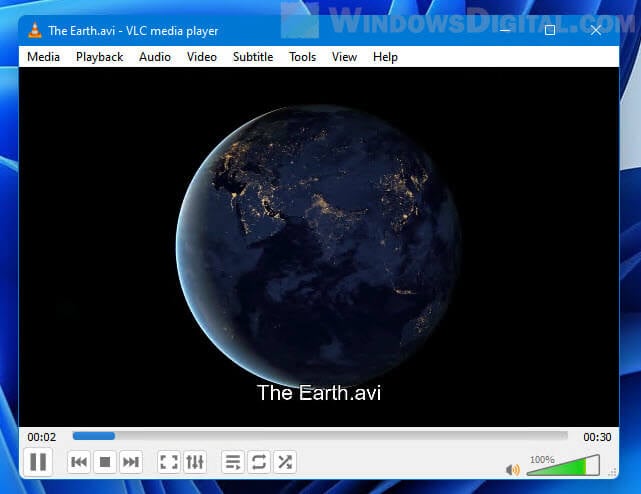 To open an AVI video file with VLC media player on Windows 11, after installing the app, simply right-click the AVI file you want to open and then select Open with > VLC media player. If you use the portable version of VLC, you may need to select “Choose another app” and browse to the VLC executable file in order to open your AVI file with it.

Alternatively, you can also open VLC media player first, select Media > Open File, and then browse to the AVI file to play it. 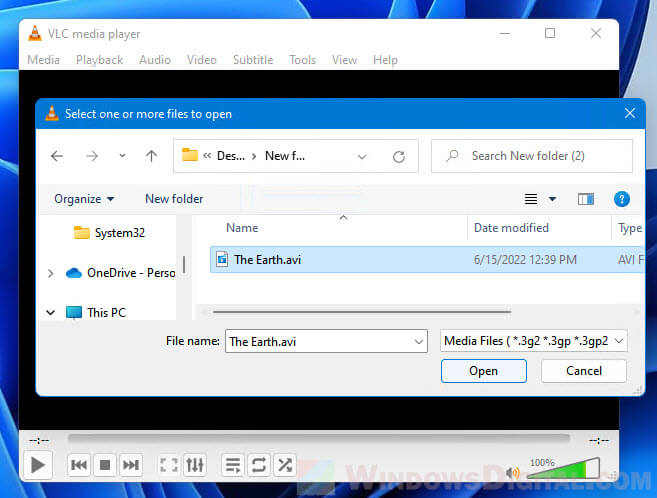 Change the default app to open AVI files on Windows 11

After changing the default app for AVI files, the next time you want to open an AVI file with your favorite video player, you can simply double-click it without the need to right-click it and select open with.

Tip: How to Open or Play SRT Files on Windows 10

Description for sharing: This guide shows you how to open and play AVI video files on Windows 11, and how to fix if you can't open AVI files in Windows 11.

If you often watch movies offline, you might need subtitles, especially when you watch a foreign movie. When you watch a movie from a video file, you can add a subtitle file to the video so that it plays with subtitles. There are plenty of resources where you can find […]

YouTube video quality keep changes randomly when you play a new video or during the video? This short tutorial will show you how to set YouTube to always play highest video quality (1080p, 1440p, 2160p or higher) permanently using extensions or add-ons on Google Chrome, Mozilla Firefox and Microsoft Edge […] 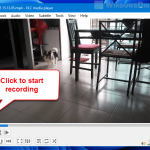 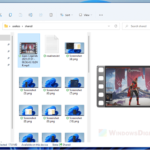 In Windows 11, you can enable the preview pane which will appear as a column on the right in File Explorer. The preview pane is able to show a preview of currently selected photo, video, text file, PDF file, word document, and other supported file type. This short tutorial will […] If you encounter the problem where Facebook or YouTube video won’t play on any browser (Edge, Chrome, Firefox) after applying Windows update, see below for why it’s happening and what you can do to solve it. Windows Update, especially the major ones, sometimes break things. I believe we have all […]