How to Enable Net Speed Monitor in Windows 11

The Internet today is full of surprises and hidden things that users may not be aware of. Having a traffic monitor to monitor your network speed from time to time can be crucial to let you know if there is anything that is using the internet bandwidth without your knowledge. It is also a great way to know how much internet speed an app is using when it is downloading or uploading something.

Back in Windows 10 and older versions of Windows, there was a simple and popular third-party app called “NetSpeedMonitor” that can display the real-time network or internet speed directly on the taskbar. Sadly, this app is not supported in Windows 11.

Also see: How to Know Which App is Using The Internet in Windows 11

How to add a network speed monitor in Windows 11

Fortunately, there are a few other apps that are able to do the same thing as NetSpeedMonitor to display a real-time network speed monitor on the taskbar in Windows 11. This guide will show you how to add a net speed monitor to the Windows 11 taskbar. 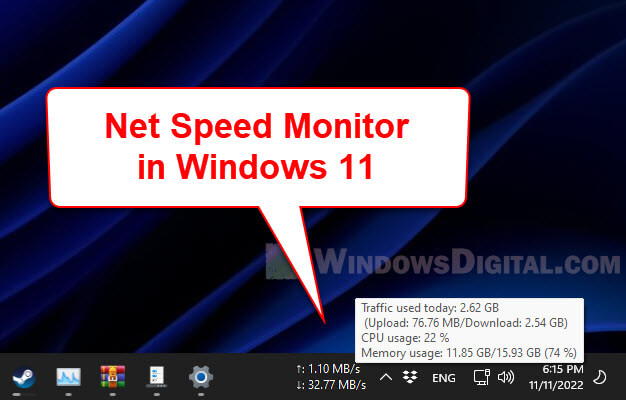 Traffic Monitor is a free and open-source app that lets users display the live network speed on either the taskbar or as a floating gadget on the desktop in Windows. Most importantly, it works perfectly fine on Windows 11.

One huge feature that makes the app stands out among other similar network speed monitor apps is that Traffic Monitor can also display the CPU and Memory usage alongside the Network traffic usage.

Follow the steps below to install Traffic Monitor and add its net speed monitor to the Windows 11 taskbar or desktop.

When you hover your mouse cursor over the speed meter, it will display more details such as the total traffic used today (upload and download), as well as the CPU and Memory usage in percentage.

If you don’t want the floating network meter to display on the desktop, right-click on the gadget and uncheck “Show Main Window”. This option will disable traffic monitor from showing on the desktop.

Read next: How to Change Ethernet Network Speed from 100 Mbps to 1 Gbps

As Traffic Monitor needs to be running in Windows 11 in order for the net speed monitor to continue displaying on the taskbar, to save you the hassles from having to run the app every time you startup your computer, you can set the app to automatically run when Windows starts.

To do so, right-click the net speed monitor on the taskbar and select Options. 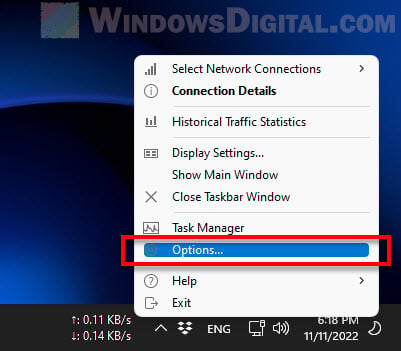 Next, go to the “General Settings” tab and enable the checkbox for “Auto run when Windows Starts” under Application Settings. 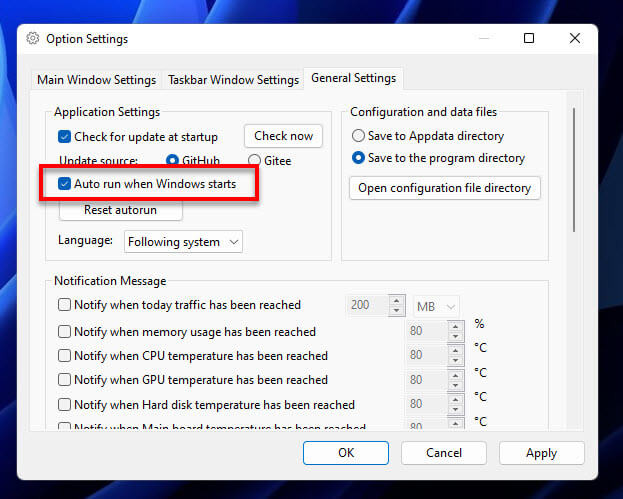 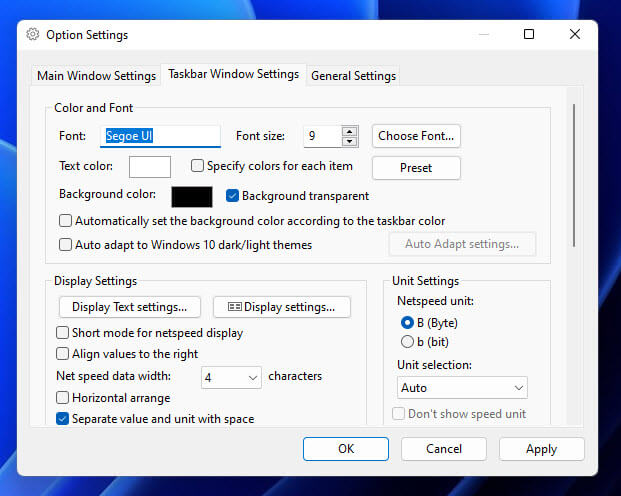 You can change settings such as the color and font of the speed meter, netspeed unit used (Byte or bit), and other display settings.

Alternatively, you can look for a network or internet speed monitor app from the Microsoft Store.

If you only want to monitor your network or internet speed without installing any third-party app, you can quickly view the network usage via the Task Manager Performance tab or the Resource Monitor in Windows 11. This method does not add any meter to the taskbar or on the desktop.

Next, click the “Performance” tab and select your Ethernet or WiFi adapter from the left pane. The network speed usage will shown on the right – the “Send” and “Receive” speed. 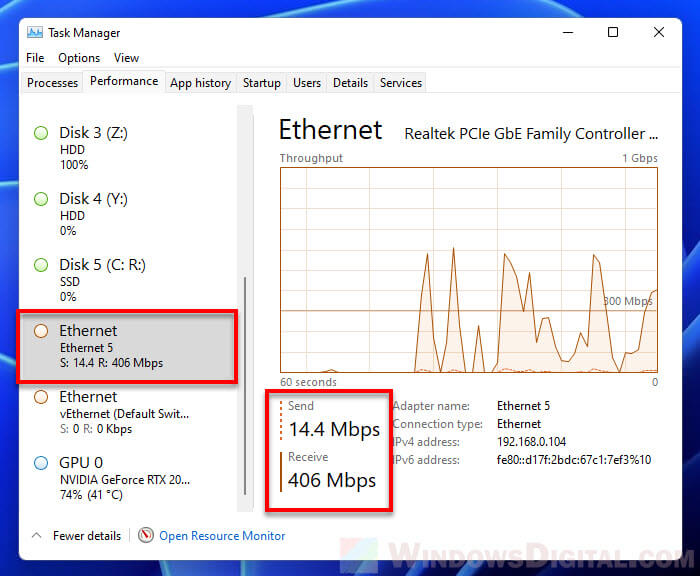 Alternatively, to view more details about which app or process is using the network bandwidth, you can use the Resource Monitor instead. To do so, click Open Resource Monitor at the bottom of the Task Manager window. 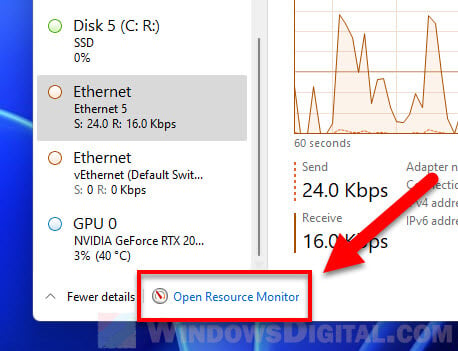 Then, select the Network tab and expand Network Activity. From there, you can view the network transfer speeds (Send, Receive and Total) of all running processes. You can sort the list by transfer speed by clicking the header of the relevant column you want to sort. Tip: Windows 11 Different Wallpaper on Each Monitor Not Working

Description for sharing: This guide shows you how to add a Net Speed Monitor to the Windows 11 taskbar or desktop to monitor your real-time internet/network speed. 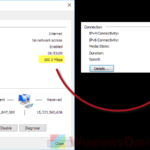 If the Ethernet Network status window shows you 100 Mbps (sometimes 10 Mbps) as the speed value, and you are attempting to change it to 1 Gbps, this guide will show you why you are seeing 100 Mbps instead of 1 Gbps and what you can do to upgrade your […] 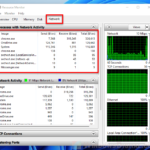 There are often situations where you would want to check which app is actually using the internet in the background to troubleshoot issues such as finding out why your internet speed suddenly becomes slow, to check if there is any app secretly uploading or downloading data without your permission, etc. […] 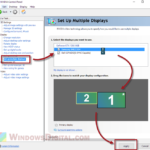 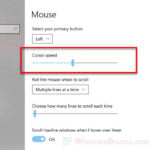 How to Slow Down Your Mouse Speed in Windows 10

If you feel the mouse pointer moves too fast across the screen with very little mouse movements, this short tutorial will show you how to slow down or adjust the mouse speed to your preference in Windows 10. The value or setting that determines the speed of mouse pointer and […] 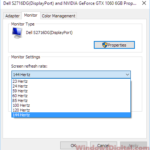