When there is a Windows update needed to be applied, you are required to restart your PC for the update to be installed automatically during the reboot. When you restart your PC, Windows Update will start to apply the downloaded update and show you a status message that says “Configuring Update For Windows 10” along with a progress percentage.

In some cases, users may find themselves get stuck at specifically 57 percent during the “configuring update for Windows 10” phase. This article explains what you can do and what you should do if you meet the same issue.

Why is “Configuring Update For Windows 10” stuck at 57 percent?

It depends on which update you are referring to. However, in most cases, it is because Windows Update is working on something large, especially if you haven’t been updating your Windows for a long period of time.

According to users’ reports and what I’ve personally experienced in recent updates, it is common on some PC that the “configuring update for Windows 10” phase may stuck at 57 percent. It may stuck for a couple of hours, but it will eventually get to 100 percent. That said, it is not an error that requires action to be taken. 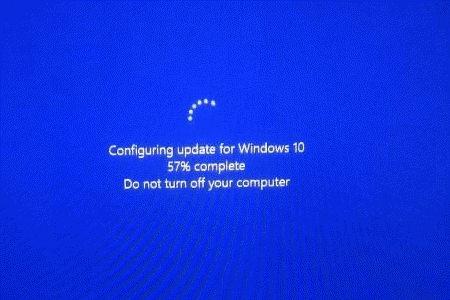 What should I do to finish the Windows update?

The best thing to do in this scenario is to just wait it out. If you’ve waited for an hour, let it sit for another couple of hours (preferably 3 hours or more) or leave it running overnight. The “configuring update for Windows 10” progress will eventually get to 100% and finish the update by itself.

The fact is that the Windows update isn’t stuck. It is still running even though it seems stuck at certain percentage (commonly 57%). It just requires more time to finish.

The amount of time needed for an update to finish, according to our experience, depends on the performance of your PC, especially the hard drive’s speed. If your hard drive is very congested and fragmented, it may cause slow reading and writing speed on the drive, thus, requiring more time to finish a Windows update.

Can I safely force restart or shut down my PC during Windows Update?

If you forcibly restart or shutdown your PC during the “configuring update for Windows 10” phase, there is a risk that you may cause damage and corruption to the core system files that Windows was trying to update. In some rare cases, Windows might fail to load on next reboot if you interrupt the update process.

However, in most other cases, if you force restart your PC during the “configuring update for Windows 10” phase, you should still be able to boot into Windows normally. Note: If you decided to force restart and interrupt the update, please do so at your own risk. We will not be held responsible for any damage or loss caused by this action.

If it’s not something inevitably important, try not to interrupt the Windows update process and let it finish running. 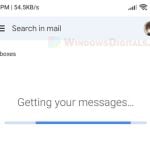 Gmail Stuck on “Getting your Messages” (How to Fix)