In this guide, we will show you the possible causes that may trigger the Windows 11 update downloading or installing stuck at 100% or 0% problem, and how to fix the issue in order to complete the update.

Why does Windows 11 update stuck?

To correctly resolve the Windows 11 update stuck issue, you first need to figure out what could be the most possible cause of the stuck problem. 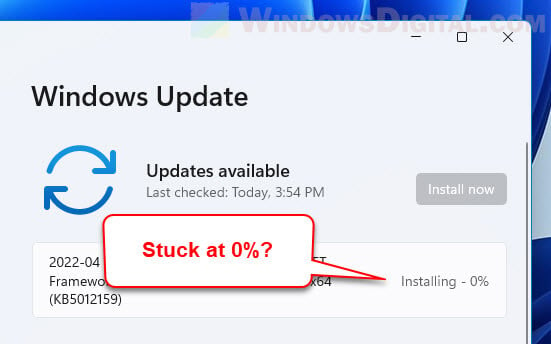 If you are using an internet connection that would go on and off (disconnect) from time to time, it may cause disruption to the Windows Update process in Windows 11. Repeatedly pausing and resuming a Windows update download would cause the download to be corrupted, thus causing the downloading process to stuck at 0% or 100%, or other even more complicated issues.

Check your Ethernet, WiFi or cellular internet connection. Try to temporarily switch to a different Wi-Fi network and retry the Windows Update.

Another common cause for Windows 11 update downloading to stuck at 0% or 100% is when your C: drive (or the drive where your Windows installation is) runs out of storage space, thus, causing the update to stuck because no new files can be downloaded due to insufficient storage space.

Double check your C: drive and make sure it has enough storage space for future updates. Make sure the drive has at least 5-10 GB free space for any update to be downloaded and installed.

If your computer frequently gets forced switched off without properly shutting down due to power outage, power supply issue or habit, it may cause Windows Update downloads or downloaded files to be corrupted, which may cause the Windows 11 update installing stuck at 0% or 100% issue. To fix a corrupted Windows update download, refer to the solution below.

Before you try any of the following solutions, make sure you have waited long enough for the Windows 11 Update process to complete. If the update has been stuck at the same percentage for over 2 hours, proceed with the following fixes.

Before going for the more complicated solution, let’s try the basic fixes first. Most Windows Update stuck issues can be resolved by simply restarting your PC, modem and router.

To properly restart your modem and router, unplug the power from the devices. Wait for 2 to 3 minutes for the modem and router to fully power off. Then, turn them back on.

This method is the most effective solution to fix Windows 11 update stuck and other related issues. It involves first to stop the Windows Update services, delete all sub-folders in the SoftwareDistribution folder (a folder where Windows Update stores downloaded files before installing them), and then restart your computer.

If any Windows update downloaded file is corrupted, or if there is any error or conflict occurred during the Windows update processes, doing the steps below will be as if you have never downloaded the problem (stuck) update, allowing you to download and install the same updates all over again.

1. First, we will need to stop the Windows Update and Background Intelligence Transfer service to prevent them from interrupting until next restart. To do so, go to start, search for and open “Services“. 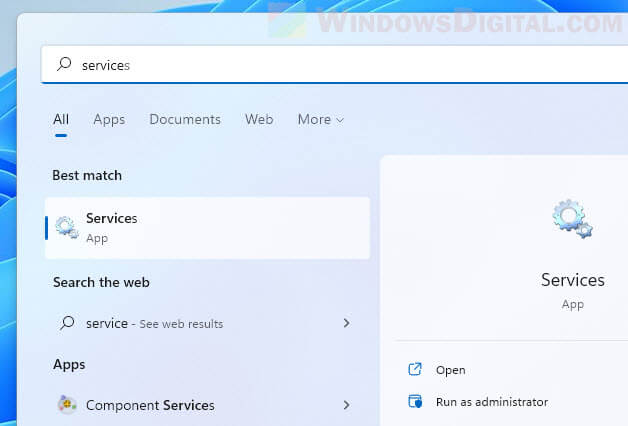 2. In the Services window, look for a service called “Background Intelligent Transfer Service“. Right-click it and select Stop to stop the service. 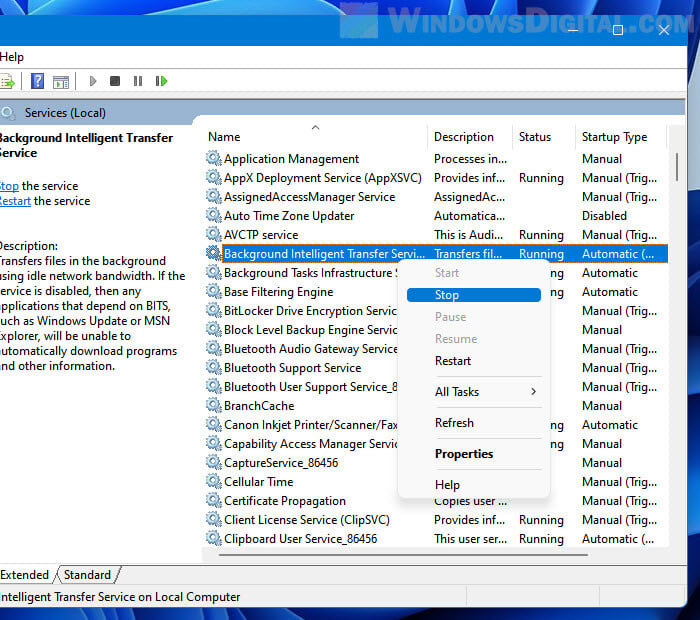 3. Next, look for “Windows Update” service, right-click it and select Stop. 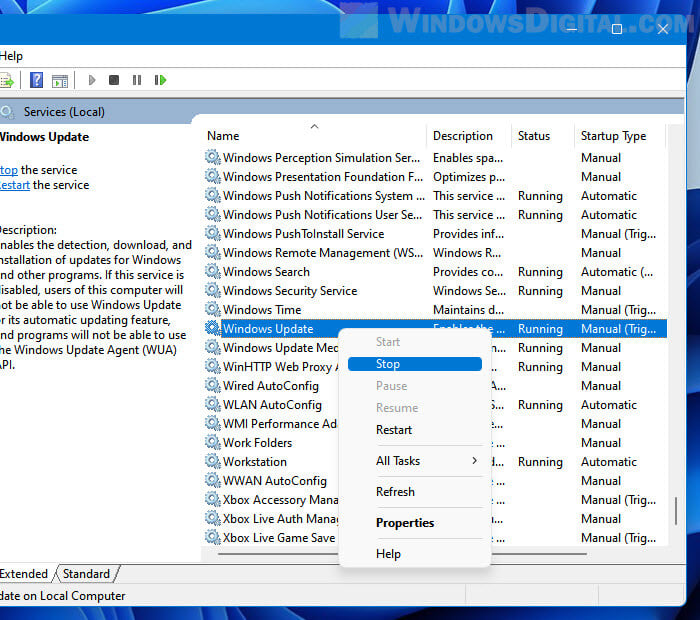 4. After stopping the services, open File Explorer and navigate to C:\Windows\SoftwareDistribution folder. This folder stores files downloaded by Windows Update. Select all the folders in this directory and then Delete them. 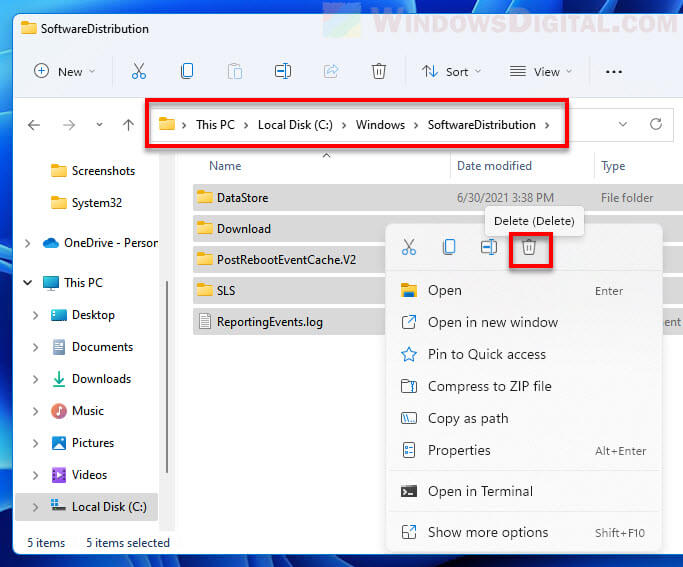 5. The deletion of these folders require administrator permission. Make sure you are signed into an administrator account in Windows 11, otherwise you will not have the privileges to delete these files. When the “Folder Access Denied” dialogue box prompts, select the “Do this for all current items” checkbox and then click Continue to proceed deleting the files. 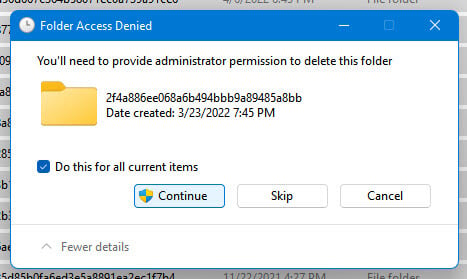 6. Restart your computer and retry “Check for updates” in Windows Update.

Press Win + i to open Settings and then navigate to System > Troubleshoot > Other troubleshooters. 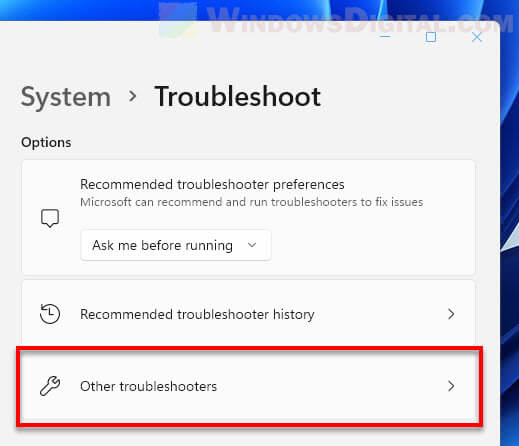 Next, look for Windows Update from the list of available troubleshooters, then click Run next to it. 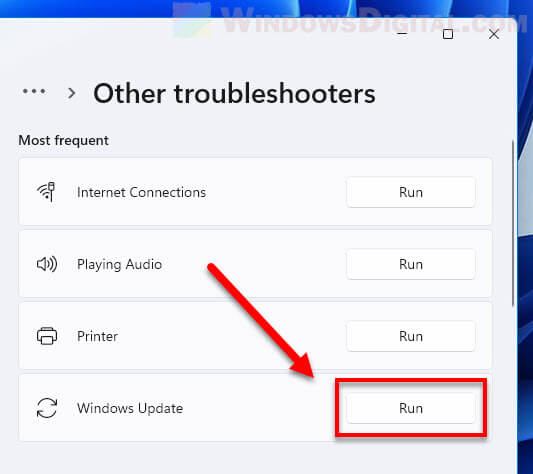 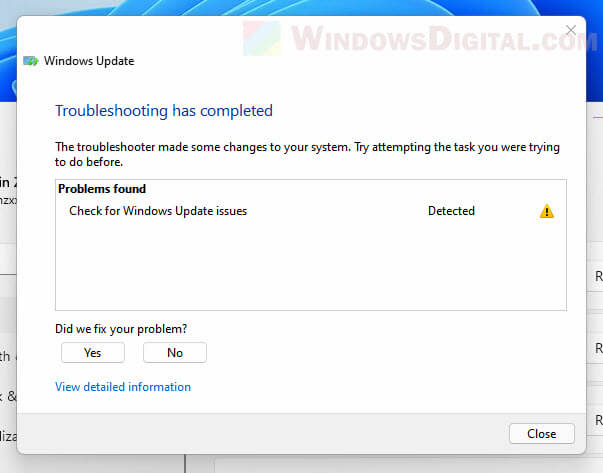 Description for sharing: This guide shows you solutions on how to fix Windows 11 Update "Downloading" or "Installing" Stuck at 0%, 100%, 99% or other percentage. 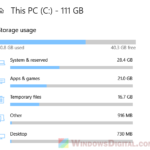 This issue is about when you click on the Clean up System Files button in the Disk Cleanup utility in Windows 10, the tool gets stuck on a specific process called Calculating Mixed Reality, and eventually crash itself as if it was never opened. Here’s what you can try to […] 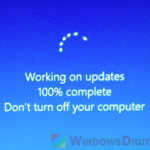 Are you getting stuck on the screen where Windows 10 display a loading message that read “Working on Updates 100% Complete” upon restart or shut down? Here’s a few important things you need to know about the message and what you can do to get around it. This particular loading […] 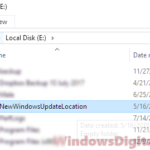 Why do we need to change Windows 10 update download location? When you run Windows Update on Windows 10, it will first download all the required installation files onto your primary hard drive – the drive where your Windows 10 was installed and stored, usually on the C:\ drive. It […] 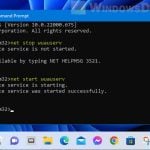 How to Restart Windows Update Service on Windows 11

Running into issues during Windows Update is not uncommon in Windows 11. If Windows Update is stuck at a certain percentage for far too long, or if it shows that the update has failed or simply with an unknown error code, rebooting your computer can usually fix the issue. However, […]