If you keep seeing unusual high CPU or Disk usage caused by a process called Software Reporter Tool (alongside with a description called Chrome Cleanup Tool) in your Windows 10 task manager, here’s how you can fix the problem.

What is Chrome Software Reporter Tool exe used for

Software Reporter Tool is an executable process came originally with Google Chrome as a side process that scans your Windows 10 for possible applications that may interfere with how chrome works.

It usually scan your computer once a week. The tool itself brings no harm at all if there isn’t any issue between your software and Chrome. Even if it has, it will only notify you and ask for your permission to do some cleanup after the scan.

However, in some occasions, it will have problem scanning in the background, and it keeps scanning without stopping. Thus, causing high CPU usage (sometimes constantly at 100% usage), high disk usage, or both in your system. 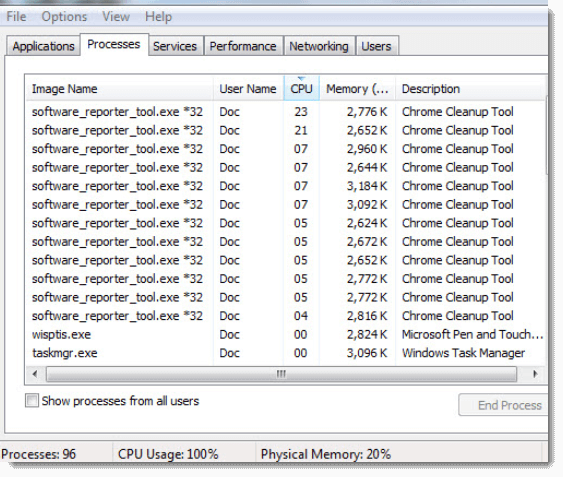 If you see something like the screenshot shown above in your Windows Task Manager, it is the software reporter tool that are causing all the slow down and lags in your computer.

It’s worth mentioning that the tool doesn’t have any network communication. All it does is scanning your local software, and report to Chrome.

To disable the process, read – how to disable Software_Reporter_Tool.exe in Windows 10.

You can remove software_reporter_tool.exe from Chrome without causing any issue to Chrome. It’s just that it will stop scanning and reporting problem to you when there is a crash while using Google Chrome later. You wouldn’t know what’s wrong unless you run the reporter tool again.

While it’s easy to delete the tool, it will be installed again whenever you update Google Chrome. For a more permanent solution, you will have to disable all users’ access to the process to completely block it from running.

How to Block Software_Reporter_Tool.exe From Running Again

As we have mentioned above, deleting the executable file can only temporary removing it. When you update your Google Chrome, it will come right back to your system. So, a more viable and permanent solution would be to completely block software_reporter_tool.exe from ever running again.

Here’s how to remove permission from all users so that this executable file can never be used again.

No one can use or make changes to this file ever again. Thus, when you update Google Chrome, software_reporter_tool.exe won’t be replaced and can’t be updated or opened again.

Tip: How to Disable Software_Reporter_Tool.exe (Chrome) in Windows 10

Description for sharing: Google Chrome's Software Reporter Tool causes high CPU and Disk usage in Windows 10? Here's how to get rid of software_reporter_tool.exe. 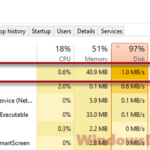 Have you noticed that your computer is suddenly slowing down, and you checked on the Task Manager only to find that a process called Modern Setup Host (SetupHost.exe) is causing high CPU usage and high Disk usage in Windows 10? Here’s what you need to know about the process and […] 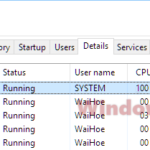 When you go to the Task Manager, you find that there is this one suspicious process called Search Indexer, also known as searchindexer.exe, constantly running at very high CPU and Disk usage. This post explains what is Search Indexer service and how to fix or disable Search Indexer Windows 10 […] 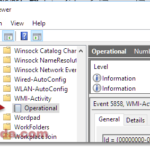 If you are seeing the WMI Provider Host, with the process name of WmiPrvSE.exe in the Task Manager, running at abnormally high CPU usage in Windows 10, this post will show you why and what you can do about it. It’s important that you know what WMI Provider Host is, […] 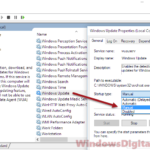 When you check on the processes in the Task Manager, you see a specific process called Windows Modules Installer Worker running at very high CPU usage or high disk usage in Windows 10. If that is what you are concerning right now, here’s what you need to know about the […] 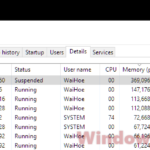 So, you noticed that your computer is somewhat slowing down. Like what you usually would do, you check on the Task Manager and to find out that a process called Microsoft.Photos.exe is causing high CPU and memory usage in Windows 10. In this post, we will explain what Microsoft.Photos.exe process […]