How to Open .CFG File in Windows 11 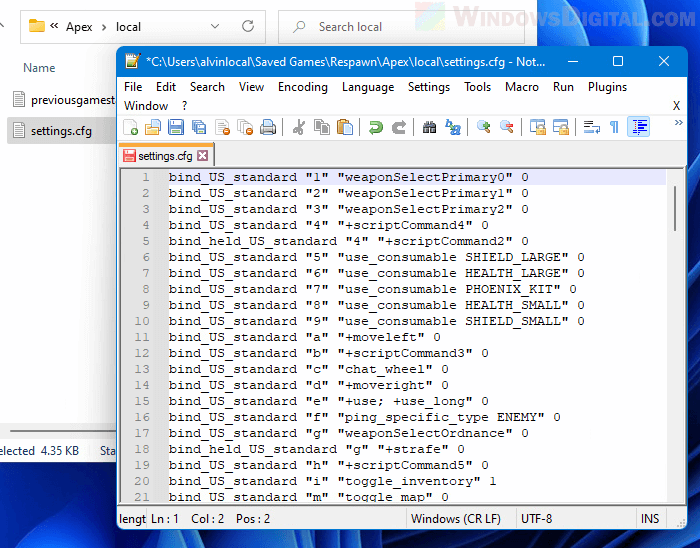 CFG configuration files are often named config.cfg or settings.cfg, containing a variable and a value per line. These variables and values tell the application or game how things should work. A .CFG extension file is generally viewable and editable by any text editor program such as Notepad or WordPad in Windows.

CFG files usually contain only texts and numbers (parameters and initial settings) that can be read by any text editor. In Windows 11, you can easily open and view a .CFG file with the built-in Notepad or WordPad application. You can also edit the .CFG file provided you have the required privileges to do so. Listed below are several text editors which allow you to open and edit .cfg files in Windows 11.

Related: How to Take Ownership of a File, Folder or Drive in Windows 11

The easiest and quickest way to open a .CFG file is to just open it with Notepad. By default, Windows does not recognize CFG extension file and will not assigned any default app to open a .cfg file. You will have to manually open it with a supported app, in this case, the Notepad.

To open a .cfg file with Notepad, right-click the file and select Open with. 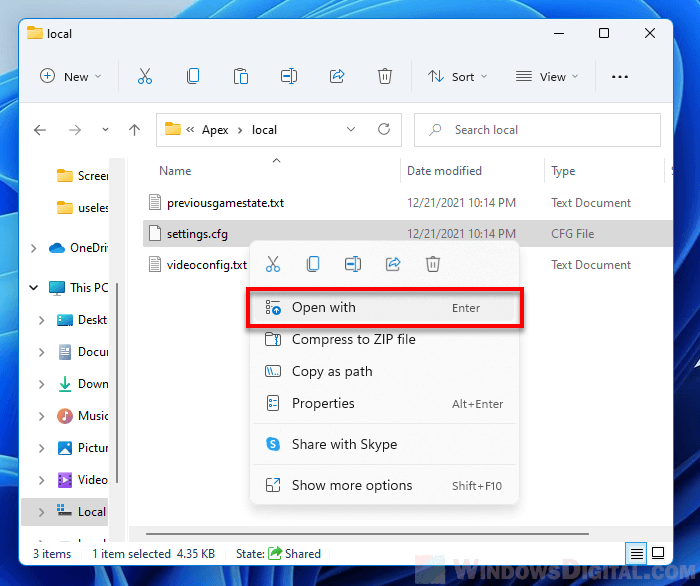 Under “How do you want to open this file”, click More apps. Then, select Notepad from the list of available apps and click OK to open it. 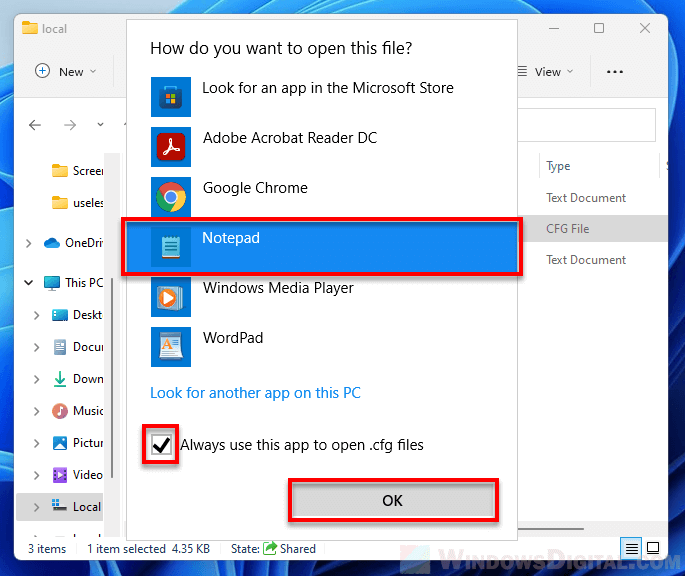 Optionally, enable the “Always use this app to open .cfg files” option to set Notepad as the default app to open all .cfg files in the future. 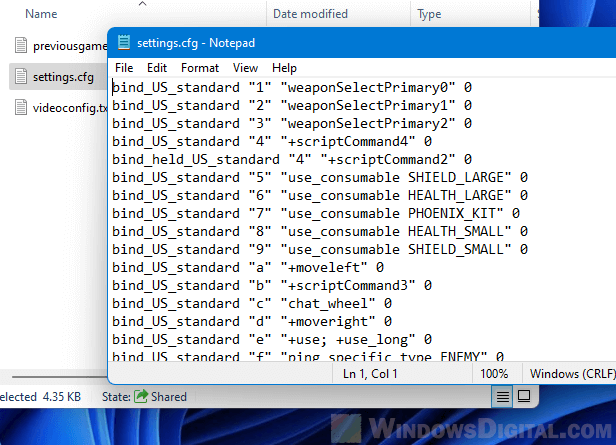 If the CFG extension file already has a default app to open it with, if the default app isn’t what you are looking for to open the file, right-click the .cfg file, select Open with, then select Choose another app. 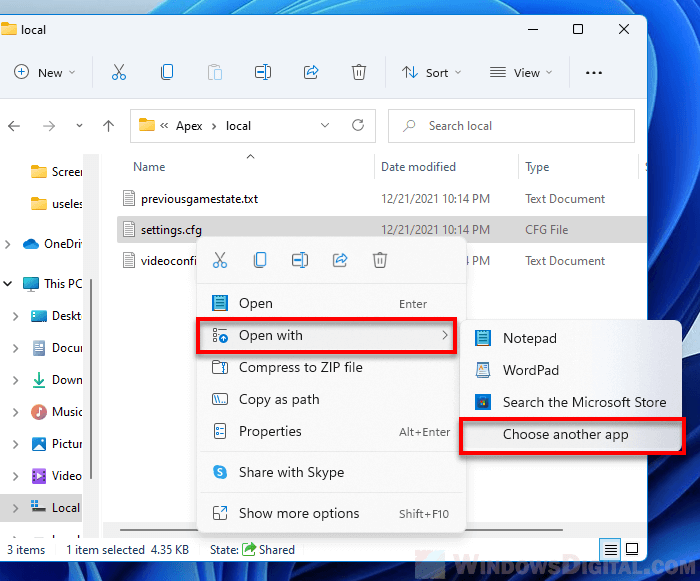 Next, select Notepad from the list of apps and check the checkbox for “Always use this app to open .cfg files” to tell Windows to always open all .cfg files in Notepad.

WordPad is another built-in word processing app in Windows with many extra formatting features. You can think of WordPad as a stripped down version of Microsoft Word. However, when you save the .cfg file after making changes using WordPad, be sure to save it as text-only file to prevent any formatting from breaking the configuration file. 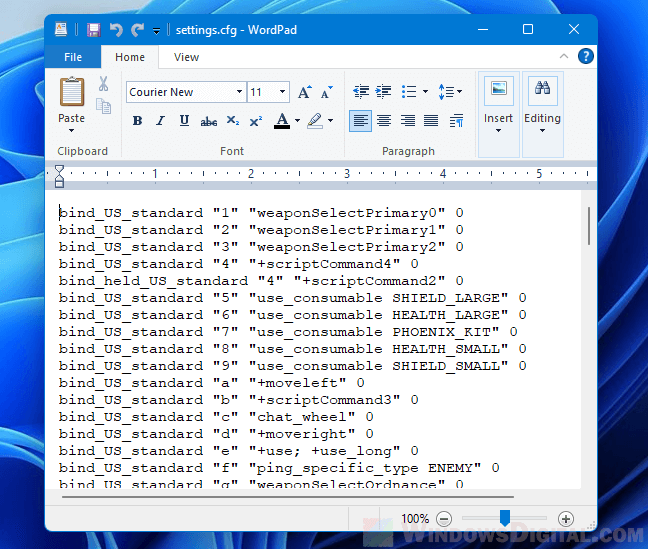 If you prefer WordPad over Notepad, here’s how to open a .cfg file with WordPad in Windows 11.

Right-click the .cfg file you want to open, select Open With. Click More apps and then select WordPad from the list of available apps. Next, click OK to open the CFG file in WordPad. 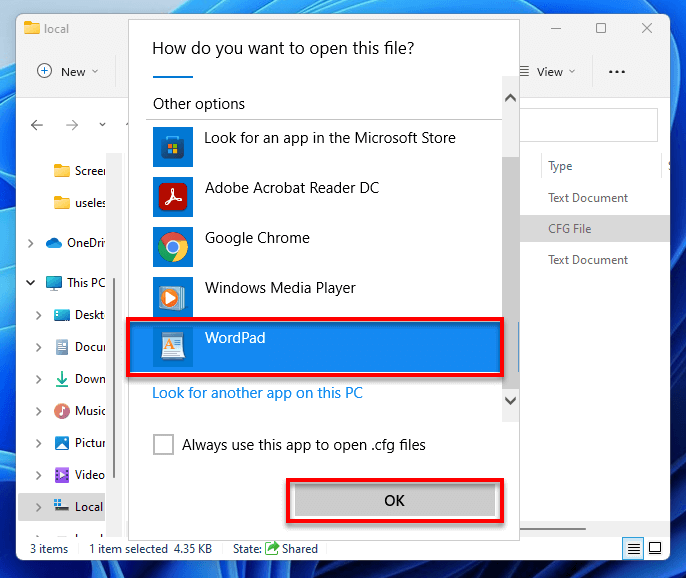 Notepad++ is a text and source code editor for use with Windows. It is very popular especially among web developers for code writing and editing. It is a much better version of Notepad with enhanced features to allow making viewing and editing text and code a lot easier. Most importantly, it is free to download and use. 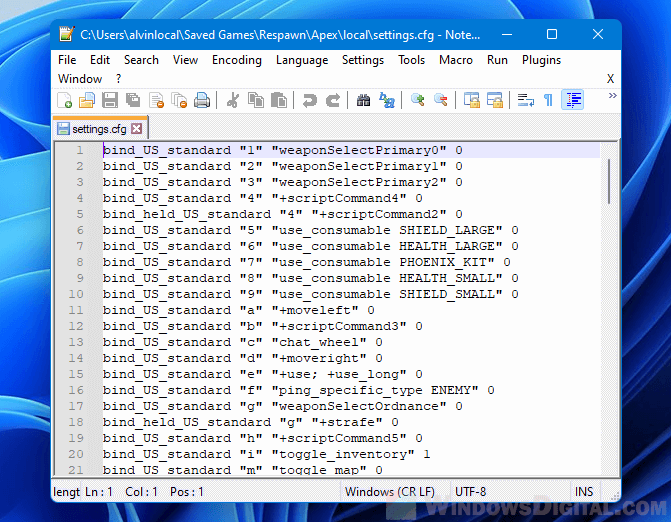 To open CFG files with Notepad++, first download Notepad++ from https://notepad-plus-plus.org/downloads/ and install it.

Once installed, right-click the .cfg file you want to open, select Open With > Choose another app.

If Notepad++ is not listed in the “open with” pop up, click “Look for another app on this PC“. 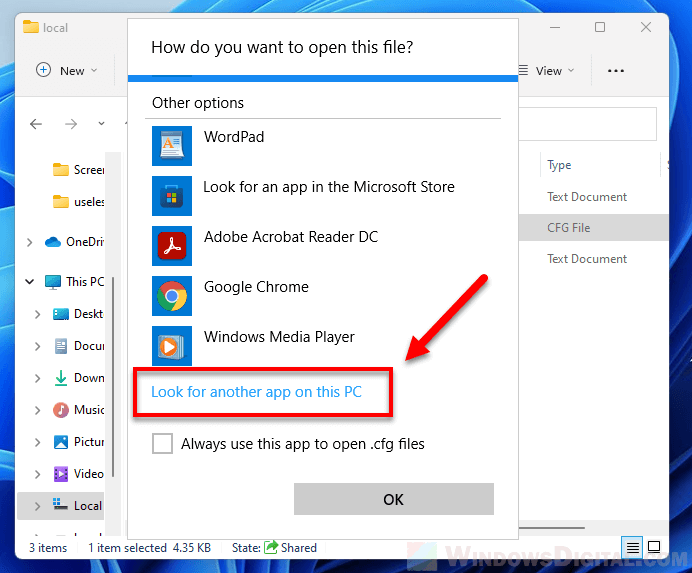 Then, browse to where the Notepad++ was installed. The installation folder is usually located in C:\Program Files\Notepad++. Once you are in the folder, select notepad++.exe and click Open to open the CFG file in Notepad++. 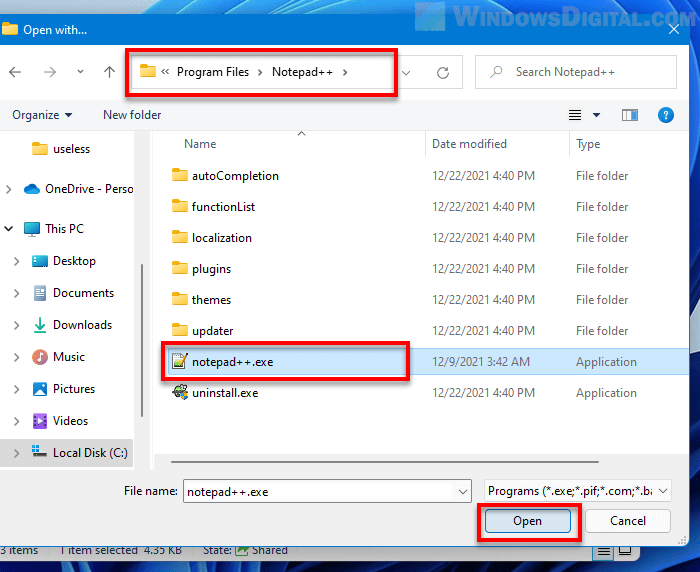 If you receive permission errors such as “Access denied” or “You don’t have permission to open this file” in Windows when you try to open a .CFG file, it indicates that your user account does not have the privilege to view or edit the file.

Most CFG files use a standard format such as XML or JSON, making them easier to view and edit. However, if a .cfg file contains custom format or style designed by the developer of the app or game, a generic text editor such as Notepad may not be able to read them properly.

If you forcefully open a large .cfg file that contains custom formatting with Notepad, the texts may appear messy along with unknown codes that only the software developers themselves could understand.

Tip: How to Open or Play SRT Files on Windows 10

Description for sharing: A simple guide on how to quickly open, view and edit CFG configuration file (.cfg extension file) in Windows 11. 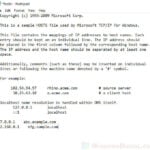 How to Edit Hosts File in Windows 10 (Access Denied?)

In Windows 10, there is a specific file in the system folder called “hosts”. This file allows mappings of IP addresses to host names. For example, if you would like the host name abc.example.com to resolve to the IP address 127.0.0.1, you can add the mapping to the hosts file. […] 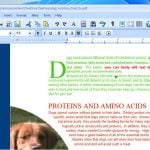 How to Edit PDF File for Free on Windows 11

PDF file is the most common file type for documents in general. PDF, which stands for Portable Document Format, is a file format developed by Adobe. Unlike other document file types such as word which may look dramatically different across different devices, PDF is designed to always look the same […] 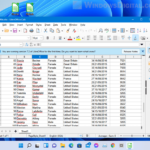 How to Open XLSX or XLS File in Windows 11 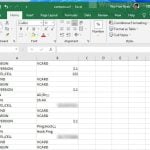 A VCF file, also known as vCard file, is a type of file that stores contact information for one or more persons or businesses. It typically contains the name, address, phone number, email address and other information of a person or business. Though rare, a VCF file can also contain […] 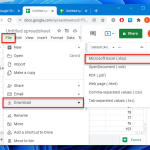 How to Convert CSV or TXT to Excel in Windows 11

TXT, CSV and Excel spreadsheet formats files (XLS or XLSX) are great ways to store data. Depending on your need and how you want to use and edit the file, you can convert TXT, CSV or Excel spreadsheets file formats to each other. Though there are plenty of online services […]