Scroll inactive windows when I hover over them (Windows 11)

“Scroll inactive windows” is an ability to scroll windows that are not active, or in other words, not in the foreground at the moment. In Windows 11, there is an option that allows you to set whether you want to have this feature enabled or not. When turned on, you will be able to scroll inactive windows when you hover your mouse cursor over them.

This feature can be very useful when you are multitasking or having multiple windows opened at a same time. You can scroll whichever window in the background without needing to select the window first.

An example would be when you have two windows opened side-by-side while you are actively working in one of the windows, e.g. writing an article, you might need to scroll the other window for information. With this feature enabled, you can scroll the other non-active window without selecting it first. 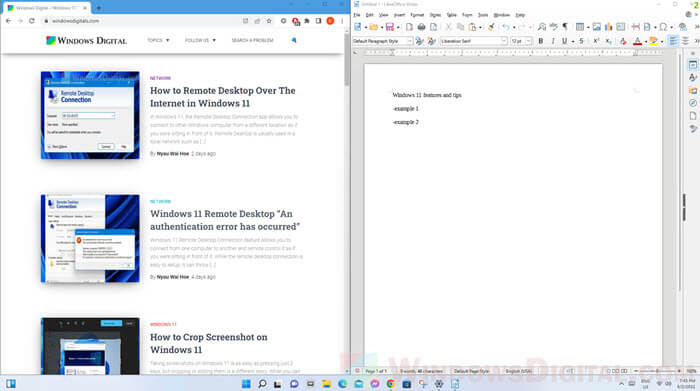 Although the ability to scroll inactive windows can come in handy in most cases, some people may not like it. In some situations, accidentally scrolling unwanted windows even when they are not active can be annoying. Since the “Scroll inactive windows when I hover over them” option is enabled by default, you can follow the same steps below to turn if off instead if you don’t like the feature.

How does scrolling inactive windows work? 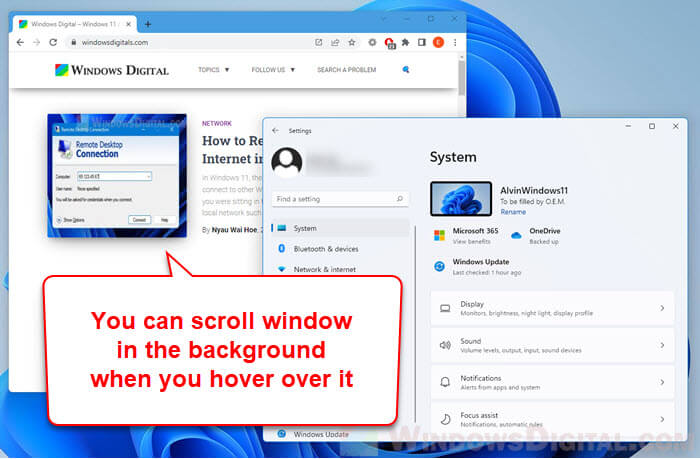 This is when the “Scroll inactive windows when hovering over them” option is enabled in Windows 11. If you can’t scroll any window in the background, it means the option is disabled.

How to enable or disable “Scroll inactive windows” in Windows 11

To turn on or off the “Scroll inactive windows when I hover over them” option in Windows 11, follow the steps below. Note that this feature is enabled by default in Windows 11.

Also see: How to Move a Window That is Off-Screen in Windows 11

There is no clear fix to this issue yet as of now. If you really need to use the scroll inactive windows feature while working with your spreadsheets, you may want to consider trying another spreadsheet program such as LibreOffice – an alternative to Microsoft Office.

Another workaround to this would be to turn on synchronous scrolling from the View tab in Excel. When this option is turned on, scrolling in one excel window will also scroll other Excel windows synchronously (simultaneously). Though this doesn’t fix the root of the issue, but it can be useful in some situations. 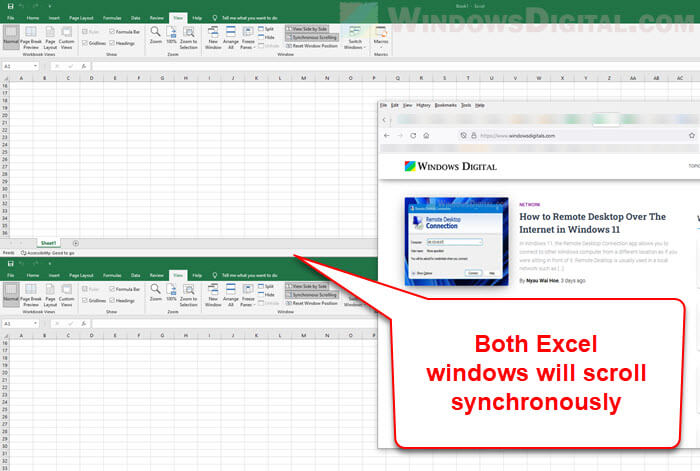 You can enable this option from the View tab in Microsoft Excel. First, enable the View Side by Side option, then select Synchronous Scrolling. Note that these options will only be available when you have two or more Excel windows opened, otherwise the options will be greyed-out. 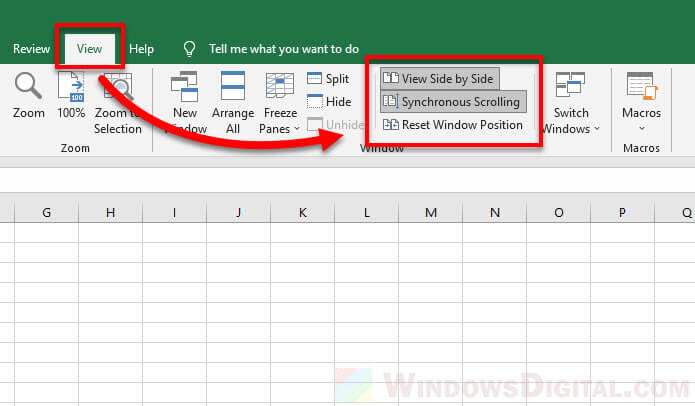 Tip: Windows 11: How to Use Snap Layouts to Snap Apps

One of the most noticeable changes in Windows 11 is that the usual Windows start menu and all of the taskbar icons are now aligned to the center of the taskbar by default, offering an entirely new user experience. If you find this change uncomfortable, you can actually align the […] 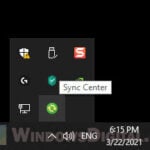 How to Disable Sync Center in Windows 10

If you see a little green icon that says “Sync Center” when you hover your mouse over it in the system tray, it indicates a Windows synchronization feature called Sync Center is currently active and running on your Windows. If you don’t need the feature or you simply want to […] 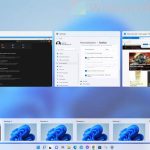 Whether you are multitasking during work or just having fun with multiple apps or games, you may sometimes need to minimize all opened windows at once to go back to the desktop screen or to focus only on one window. This guide will show you two methods on how to […] 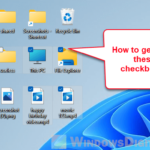 How to Remove Checkboxes From Icons in Windows 11

If you see checkboxes (tick box, check mark) on each of your files and folders icons on the desktop or in File Explorer, this guide will show you how to remove the checkboxes from the icons in Windows 11. Why is there a check mark on my desktop icons? The […] 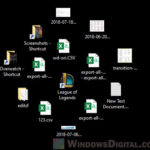 By default, Windows will auto arrange your icons to the left and align them to fixed grid. Newly created or added desktop icon will be automatically placed to the left most available grid on the desktop. If auto arrange feature is turned on, you can’t manually move or arrange desktop […]