KMPlayer is one of the most popular default video player alternatives for Windows 10. It is known for its capability to play nearly all types of videos with its self-contained codec. Here’s how to free download KMPlayer for Windows 10 64 bit offline installer for laptop or desktop PC.

KMPlayer supports 36 languages and has been widely used by users from all around the world. It can play high quality movies and videos in 3D, 4K or UHD. One of the most stunning feature is that you can capture video and audio or instant screen capture while playing a video. 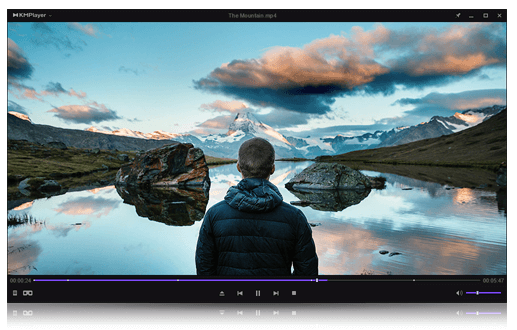 The default KMPlayer for Windows 10 64 bit download is an offline installer which you can download from its official website. Unlike many other web installers, it doesn’t need internet access to run the installer. Thus, you can use the installer on computers that don’t have internet connection.

KMPlayer for Windows 10 64 bit is free to download and use (freeware). In other words, you don’t need to purchase any license to use the software, as per KMPlayer.com. 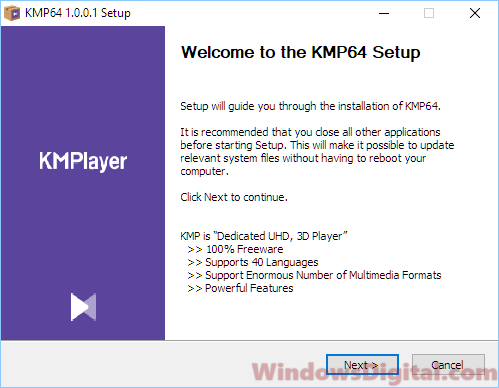 What video formats can KMPlayer for Windows 10 64 bit supports

KMPlayer can a wide range of different file formats WMV, AVS, AVI, ASF, FLV, MP4, MKV, RTS, MPEG1, MPEG2, AAC, WMA7, WMA8, OGG and others. To view a full list of supported file types, go to its official website at kmplayer.com. For unsupported video formats, you can install the codecs from external sources to make it playable in KMPlayer for Windows 10.

Can KMPlayer work with VR files or programs?

KMPlayer VR is currently only available for Android devices. The KMPlayer VR can work with various virtual reality files. If you have a VR ready video, you can use KMPlayer VR to play it on your Android mobile phones.

However, the KMPlayer for Windows 10 64 bit doesn’t support VR as of now.

Will I need additional codec to play video using KMPlayer?

KMPlayer for Windows 10 64 bit already includes codecs that can play majority of video types. However, to play an uncommon video format, advanced users may still need to manually install the codec that support the video file type so that the video can be played on KMPlayer.

Is KMPlayer for Windows 10 64 bit safe to download and use?

Like mentioned above, the download link provided in this page are from kmplayer.com official website. KMPlayer has been around for more than a decade now and it is also one of the most widely used video player for Windows 10 PC in the world. So, you can rest assured that the download is safe.

Anyway, we recommend that you always check on the download link before downloading any software installer and make sure they are at least from the official website. Downloading from external sources may risk installing unwanted programs and possibly malware infected software.

Description for sharing: Looking for a video player alternative for Windows 10? Here's how to free download KMPlayer for Windows 10 64 bit PC offline installer.

In most modern Windows 10 laptop or tablet computers, the screen brightness is usually set to be adaptive and automatically adjusted based on changes in ambient light. For instance, if you are in a darker […]

A split screen on Windows 10 is a multitask approach where there are multiple applications displayed on a screen at once. If this is what you are trying to achieve, this tutorial will show you […]

How to Clear Cache (Memory, Browser or Temp Files) on Windows 10

A cache is a collection of files or data that are stored on your computer so that future requests of the same files or data can be served much faster. When we talk about clearing […]

How to Disable Services From Running at Startup on Windows 10

If you want to disable a service from running at startup because you no longer need it or its corresponding program, you suspect the particular service is a malware, or that you don’t prefer it […]

One of the most common issues with Windows after a long time usage is that some programs or software, which may or may not be harmful, often set themselves to run at startup automatically with […]